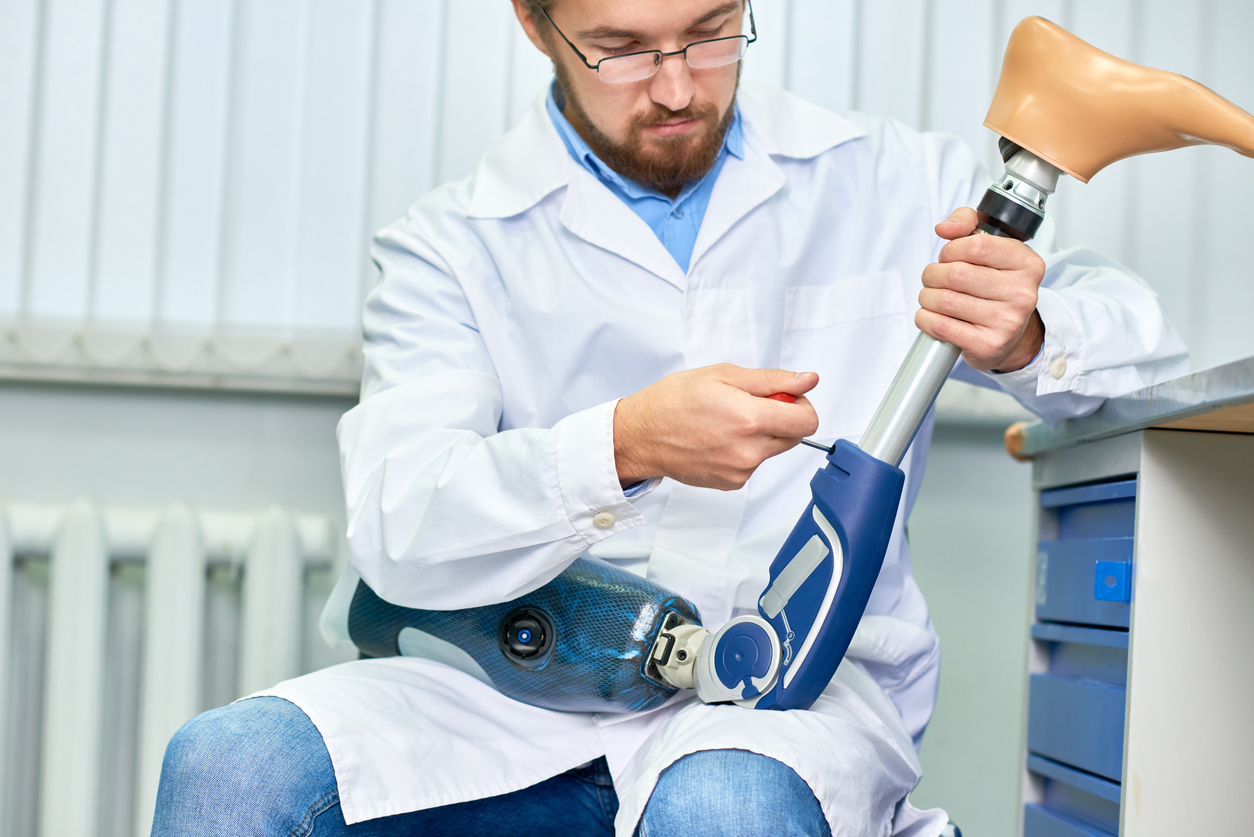 The Vital Role of Springs in Medical Prosthetics

Artificial limbs and joints have changed the lives of millions of people worldwide. The field of medical prosthetics continues to push the boundaries of what technology can achieve to improve the lives of those with missing limbs.

Some prosthetics are simple in design, crafted by hand to provide basic functionality in place of an absent limb. Others are highly advanced, using computer aid design and myoelectric to create models that closely mimic the aesthetic and movement of a natural arm, leg, foot or hand. Regardless of their simplicity or complexity, almost all prosthetics rely on springs in some way to function. As experienced spring manufacturers, we make springs and wire forms for a wide variety of applications. Today we’re going to take a closer look at how springs are used in medical prosthetics.

A Brief History of Prosthetic Limbs

Prosthetics are an ancient technology. Archaeological examples of artificial body parts include a 3000-year-old mummy with a wooden toe, many sets of early false teeth connected to intact teeth using metal bands and perhaps the most famous ancient prosthetic limb in Europe – the Capua Leg. However, whilst these examples were impressive for their time and showed extraordinary levels of craftsmanship – they were stop-gap solutions, offering little functionality.

It wasn’t until around the 16th century and beyond that prosthetic design began to factor in functionality, design and moveability. Innovative military surgeon Ambroise Paré pioneered functional prosthetic design – attempting to replicate the movement of biological limbs using pulleys, cables, hinges and of course, springs. His stand-out design was a mechanical hand that used catches and springs to simulate the movement of the finger joints. The design worked so well that a French Army captain wore a version of the prosthesis into battle, claiming he could grip and release the reins of his horse using the hand.

Following World War One and other large-scale conflicts, the demand for prosthetics rose drastically as wounded soldiers required artificial limbs to replace those lost in battle — this was when we started to see widespread use of springs in prosthetics. Their ability to store and release energy mimicked that of the muscles in the human body, allowing prostheses that were much more comfortable and functional to be manufactured.  As demand has increased and technology advances, prosthetics have become unbelievably sophisticated.

Today, high-end artificial limbs use state-of-the-art materials and robotics, connecting limbs to the patient’s neural network to provide astounding levels of functionality and precision. Whilst this is incredibly impressive, it is worth noting that those cutting-edge technologies are astronomically expensive and not readily available to most people. Many who rely on artificial limbs will be much more familiar with 3D-printed models, which are cost-effective to produce whilst also being aesthetically pleasing.

Almost all lower limb prosthetics will feature a spring in some form, and they’re a great example of how springs can aid with artificial limb functionality. The majority of the lower leg, ankle and foot prosthetics are passive devices that store energy in a compression or tension spring at the beginning of a step before releasing it during push-off. This is similar to the boost a natural ankle would get from the ankle muscles contracting and releasing.

These prosthetics are incredibly energy-efficient, but they don’t necessarily give the wearer the total power they would get from a natural ankle muscle. Researchers at Belgium’s Vrije Universiteit Brussel created the Ankle Mimicking Prosthetic Foot (AMP-Foot) to combat this issue. The AMP-Foot includes a low-power actuator that stores power in integrated tension springs and only releases it when needed, similar to that of a natural ankle and in contrast to an unassisted spring which would release all its stored energy in one go.

The hand is a challenging part of the body to artificially replicate due to the number of joints, movement range, and force distribution. As experienced compression spring manufacturers, we understand the critical role springs play in body-powered prosthetics like spring and cable powered artificial hands. Commercially available prosthetic hands are usually simple grippers with one or two degrees of freedom and rigid appendages. The thumb is controlled by a compression spring mounted pulley, operated by a body-controlled pull cable on the most basic models. The spring allows for the grabbing motion that gives an artificial hand its functionality, and you’ll often hear this referred to as a ‘voluntary opening’ prosthetic

More advanced artificial hands use myoelectrical technology to control the limb. These devices are engineered to respond intuitively to the user’s muscle contractions and can even be controlled through an iPad or phone app. However, no matter the sophistication of the design, be it a mechanical or powered model, artificial hands rely on springs to mimic the contraction and release of the muscles and tendons in the natural hand. Wire forms also play a pivitol role in the creation of artificial hands. The below image shows a 3D print of a hand palm and wire form – both of which are produced by Airedale Springs.

The Future of Springs In Prosthetics

Medical prosthetic technology continues to advance. For example, we are beginning to see bionic limbs offering very close functionality to a natural limb. In addition, myoelectric limbs, which convert muscle movement to electric signals, are becoming more widely available. These prosthetics may very well be the future, but to ensure artificial limbs are accessible to all who need them (not just those who can afford the most advanced technology), manufacturers continue to offer a range of limbs, from the most basic spring and cable body-powered models through to electrically powered, responsive designs. Of course, the spring will always play an essential role in medical prosthetics due to its capability to store and release energy.

As an experienced compression, tension and torsion spring manufacturer, Airedale Springs creates high-quality, versatile springs for many applications every day. If you would like any more information about our springs, please contact us.